To offer you a better experience, this site uses profiling cookies, even from third parties. By continuing to browse our site you accept our cookie policy

Founded in 1946, the Sebago® Company was started by three New England natives and friends: Daniel J. Wellehan Sr., William Beaudoin and Joseph Cordeau. The first shoe they released was a hand-sewn penny loafer. Sebago’s® penny loafer was inspired by the popular Indian moccasin and featured the company’s patented welt construction. It was a BIG success. With a firm foundation in quality and style, the Sebago® Company started to expand quickly.

By 1954, they had celebrated the production of their 1,000,000 shoes, which were now being sold in Sears and Montgomery Ward. Then, throughout the 50s and 60s Sebago expanded its collection by offering a range of shoes, including women's models, and began to export internationally.

In 1970, Sebago® released their most recognizable model to date, the iconic 'Dockside' boat shoe. Known for their handsewn genuine moc construction, slip-resistant rubber sole, and non-corrosive brass eyelets. The Docksides are an iconic silhouette, as worn by Pharrell Williams, Steve McQueen, Paul Newman and Kate Middleton. 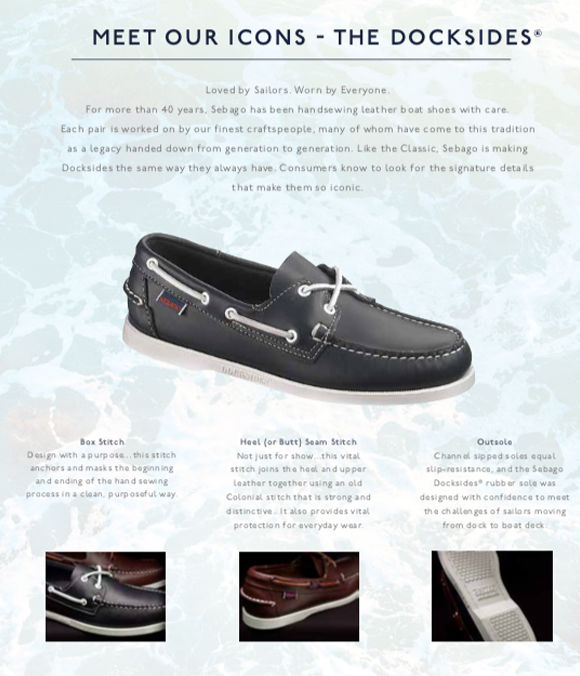